If you are just starting on golfing or hold an interest in this game, then you have definitely asked yourself what the numbers printed on the golf balls mean. Getting more information about every aspect of golf can make you a better player and this includes the numbers on the wall. Golf is a great sport with countless underlying nuances that you need to be conversant with. Even as you work hard to improve your swing, you also need to acquaint yourself with other aspects of this game. Here is what you need to know about the numbers on golf balls.

Reasons why golf balls have numbers on Them

The simple reason best golf balls have numbers is to make it easy for golfers to identify their ball when playing. In the past when golf ball brands were fewer and markings were not differentiated, it was hard for golfers to determine which ball was theirs. The balls looked alike and many golfers played using the same brand of balls.  By printing numbers, the players had another way of knowing their ball when they stumbled upon them. Today, there are many brands of golf balls on the market. However, some models are more prevalent than other.. Therefore, if several golfers in one group are playing with the same brand of golf balls, the numbers can be used to give a clear differentiation. 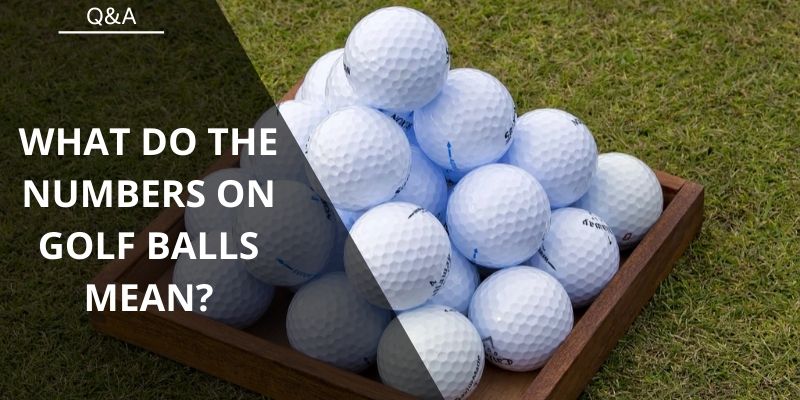 Usually, golf balls have single, two, and three-digit numbers printed on them.

Single-Digit numbers–In most cases, golf balls will have a single-digit number that is meant for identification purposes only. This means that if you are playing golf with your team members, every player can have a ball that has a single-digit to show which ball belongs to which player. Such golf balls will have numbers 1 to 4; however, it is completely acceptable to have numbers 0 to 9.

Three-Digit numbers–Golf balls can also have three-digit numbers between 300 and 400. These digits usually show the number of dimples that the golf ball has.  This number should not be confused with 100, which is meant for compression ratings only.

Numbers that are Permissible on Golf Balls

When it comes to golf balls, there are no restrictions regarding the numbers printed on them. Most manufactures will print numbers 1 to 4 on their balls. Some ball manufacturers may even print numbers as high as 8. Theoretically speaking, golf balls can have any random number printed on them. With custom orders, golf ball manufacturers are willing to print even two-digit numbers on golf balls. Some golfers can pick numbers that they feel are special to them or lucky numbers. However, according to the Rules of Golf, a golfer does not have to use golf balls that have the same number all through one round.

In a bid to add another layer of differentiation, some golf ball manufacturers tend to print numbers on their ball using different colors mainly black or red. In the past, the color of the ball numbers usually designated the compression. Black numbers showed 100 compression balls, while red numbers represented 90 compression balls. However, today, red and black colors do not indicate anything special.

The numbers printed on every golf ball is just a great classification strategy. These numbers help golfers around the world to understand their sport better and the type of gear that is good for their game. Buying new golf balls that have no identification numbers may be a challenge, especially if you play with golfers who have the same ball. It is always better to have a way of identifying your golf balls and having better knowledge about the type of golf balls you are buying. This way, you will have the best ball that suits your golfing technique and style.